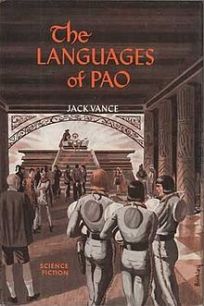 This is the classic linguistic science fiction novel. It was first published in 1957 in Satellite magazine, followed by an expanded novel version in 1958. The Languages of Pao is based in the Sapir–Whorf hypothesis– the idea that the structure of a language affects the speakers’ culture, perception of the world, and even mode of thought. Jack Vance takes it one step farther, however, and postulates social engineering via language. The planet Pao is a heavily populated agrarian backwater. Its ruler, the Panarch, decides to try to reform the population by hiring outside consultants to craft new languages- a warrior language, a scientific END_OF_DOCUMENT_TOKEN_TO_BE_REPLACED