This is the classic linguistic science fiction novel. It was first published in 1957 in Satellite magazine, followed by an expanded novel version in 1958. The Languages of Pao is based in the Sapir–Whorf hypothesis– the idea that the structure of a language affects the speakers’ culture, perception of the world, and even mode of thought. Jack Vance takes it one step farther, however, and postulates social engineering via language. The planet Pao is a heavily populated agrarian backwater. Its ruler, the Panarch, decides to try to reform the population by hiring outside consultants to craft new languages- a warrior language, a scientific language, and a mercantile language. 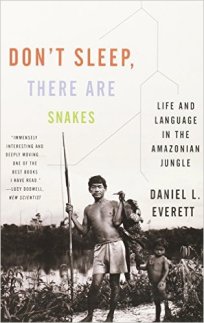 Don’t Sleep, There Are Snakes, by Daniel Everett
Nonfiction

Don’t Sleep, There Are snakes chronicles anthropologist Daniel Everett’s career studying the Pirahã people of the Amazon. It chronicles his first contact with them as a missionary, and proceeds through his attempts to learn the language and translate the Bible into Pirahã into his education as a linguist and anthropologist, and eventually leading into his complete transition into the role of scientist. The Pirahã possess a unique language and culture, one which has become a hotbed of debate in the linguistic community- there are claims that the language provides evidence of linguistic relativity, among others. Even aside from that, it’s a fascinating language- no abstract color names, some of the fewest phonemes of any known language, no linguistic recursion, etc. My favorite part of their language is their directional system- instead of having a system like North/South/East/West or Left/Right, they instead have a directional system that relies on Upstream/Downstream/Away from the River/Towards the River. The book received a lot of attention online due to the story of Everett’s loss of faith (no Pirahã among other Pirahã has ever been known to convert to Christianity during all the centuries of contact), but his embrace of atheism only takes up a single chapter of the book- the rest is dedicated to his experiences among the Pirahã, their language, and culture.

This one takes a slightly different bent- it goes after an alien language. The Ariekei have a language that can only be spoken by a few humans that have been genetically engineered in pairs to do so, since it requires two words to be spoken at once. Lying and speculation are both apparently impossible in the language, and they create living similes by drafting individuals into strange ordeals- like the protagonist. Everything starts to fall apart when a new translator appears- one who hasn’t been engineered to do so, and is merely two individuals linked together. It’s an incredibly strange novel, like anything written by Mieville, but definitely worth the read.

Alright, this one isn’t something to read, but it fits right into the theme. In Darmok, Captain Picard is stranded on a planet with a member of an alien race who is completely unintelligible. The Universal Translator (woo, ridiculous Star Trek devices!) works- the individual words the alien speaks makes sense, but they don’t make any sense while put together. One of my favorite episodes of all time.