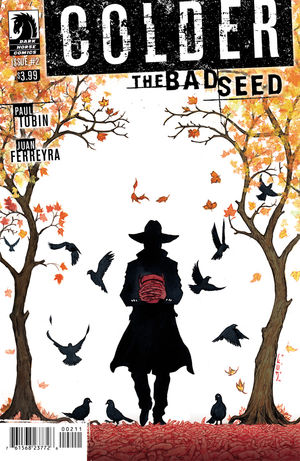 The original run of Colder, from 2012, was fantastic- it’s one of my favorite horror comics to this day, surpassed only by Locke and Key. About a former asylum inmate, Declan,  whose body temperature grows slightly colder every day, it’s a twisted, horrifying tale exploring an otherworldly realm accessible only to the mad, and the horrifying beings who live there. Colder: The Bad Seed continues Declan and Reece’s story, with a terrifying new villian, Swivel, a well dressed, polite, demented, murderous thief of fingers determined to drag Declan back into madness, and planning on revealing his mysterious past. Juan Ferreyra’s art is as fantastic as ever, though the cover, while not bad, doesn’t hold up to the usual amazing standard of Colder covers. The story in The Bad Seed definitely feels a little slower, but the stakes are definitelty much higher. If you aren’t reading this one, you need to.

I’ve been looking forwards to this one for a while. Matt Fraction is just getting better and better with every title, and Christian Ward’s art is a perfect complement. ODY-C is a gender-bent scifi retelling of the Odyssey. It isn’t a direct retelling, by any means, of course. Circe is recast as the Cicone, a civilization of mercenaries and barbarians plaguing the starways. The treatment of the recaptured Helen analogue is very, very different than in the original. There are a lot more differences, too. Fraction and Ward seem to be setting up the gods as the main antagonists in this- to be fair, the wrath of the gods, especially Poseidon, was the main source of conflict in the original, but they weren’t enemies- Odysseus was trying to earn back their favor. The gender-bending isn’t a direct male to female twist, either- there is a third gender, the sebex, as well. In fact, there is only a single male in existence in this universe, and that’s He, the Helen analogue.  My only complaint is that Odyssia’s ship is actually called the ODY-C, which seems kinda self-referential to me, but that’s just a minor quibble. Overall, this is one of Fraction’s best debuts yet- I’d highly recommend it.

Letter 44 is a weird one- I originally picked it up because it was a scifi comic about potentially hostile first contact, but I’ve come to appreciate the political intrigue of the groundside of the comic more than the spaceborne segments of the story. The scientists, engineers, and soldiers on board the spaceship Clarke are fairly interchangeable and forgettable, but the political intrigue surrounding President Blades on the ground is considerably more compelling. The art stays consistently good, too. Would I recommend it, though? There isn’t a lot going on as far as space battles go in comics right now, so if you’re looking for some, this is about as close as you’re going to get for now. Plus, the ground level intrigue is a lot of fun. It’s not the greatest comic in the world, but it’s not bad.

“From the pages of The Sandman” was the tagline that originally got me into Dead Boy Detectives- I figured it had to be worth a shot, though I’m not usually a fan of spin-off comics. It’s really fleshed itself out into a comic worth reading purely on its own merit. Ghosts Edwin and Charles, and their living partner Crystal make for a great team, with a fantastic dynamic. Issue 11 wraps up the current storyline- a whodunit case where Charles tries to find out who really killed his mother decades ago. It was a pretty satisfying conclusion, too, though I use the phrase whodunit very literally- the denouement is a callback to the classic whodunit endings of the 20’s and 30’s, with all the actors gathered in a room to hear the detectives explain the solution all neat and perfect. I usually dislike whodunits (with a few notable exceptions, of course. Arthur Conan Doyle and Agatha Christie are great), but it actually works very well here, which I think was actually the intention.

This is the final issue of the New Warriors reboot, which I’m actually finding myself really disappointed about. While it suffered lackluster sales and reviews, Christopher Yost did get to continue Scarlet Spider’s story after the cancellation of that series, which made me happy. I have no idea what is going to happen to Kaine now, but I’ll keep my eyes open for more of him. As for the rest of the New Warriors- it was a pretty good run, even if it felt like the story tended to drag on fairly slowly, in favor of numerous fight scenes. With any luck, some of the new characters in the series won’t just fall by the wayside. (Haechi (an Inhuman) and Jake Waffles (It’s complicated. Really, really complicated.) are especially fun.)

The Manhattan projects has consistently been one of my favorite comics in my pull- I absolutely love the idosyncratic art and bizarre storyline. The story follows a group of scientists who have been manipulating the world and performing bizarre super-science for years. The original Manhattan project was merely a front for other, more bizarre projects. Issue 25 marks a major turning point in the comic- rather than an ensemble comic, it’s going to focus on smaller groups of the characters for the upcoming arcs. This issue spent its time preparing for these upcoming storylines, which I’m pretty excited for. It seems like Yuri and Laika are about to be reunited, and Cyborg Wernher Von Braun has been captured by aliens. Albert Einstein, his multiversal, chainsaw-wielding counterpart Albrecht Einstein, and Richard Feynman are roaming the multiverse searching for new worlds. Back on Earth, Cuba and Russia have also been taken over by hostile aliens, but with Lyndon B. Johnson, Leslie Groves and company plotting a little world domination of their own… well, if you haven’t read any of the Manhattan Projects, now is the time to start.