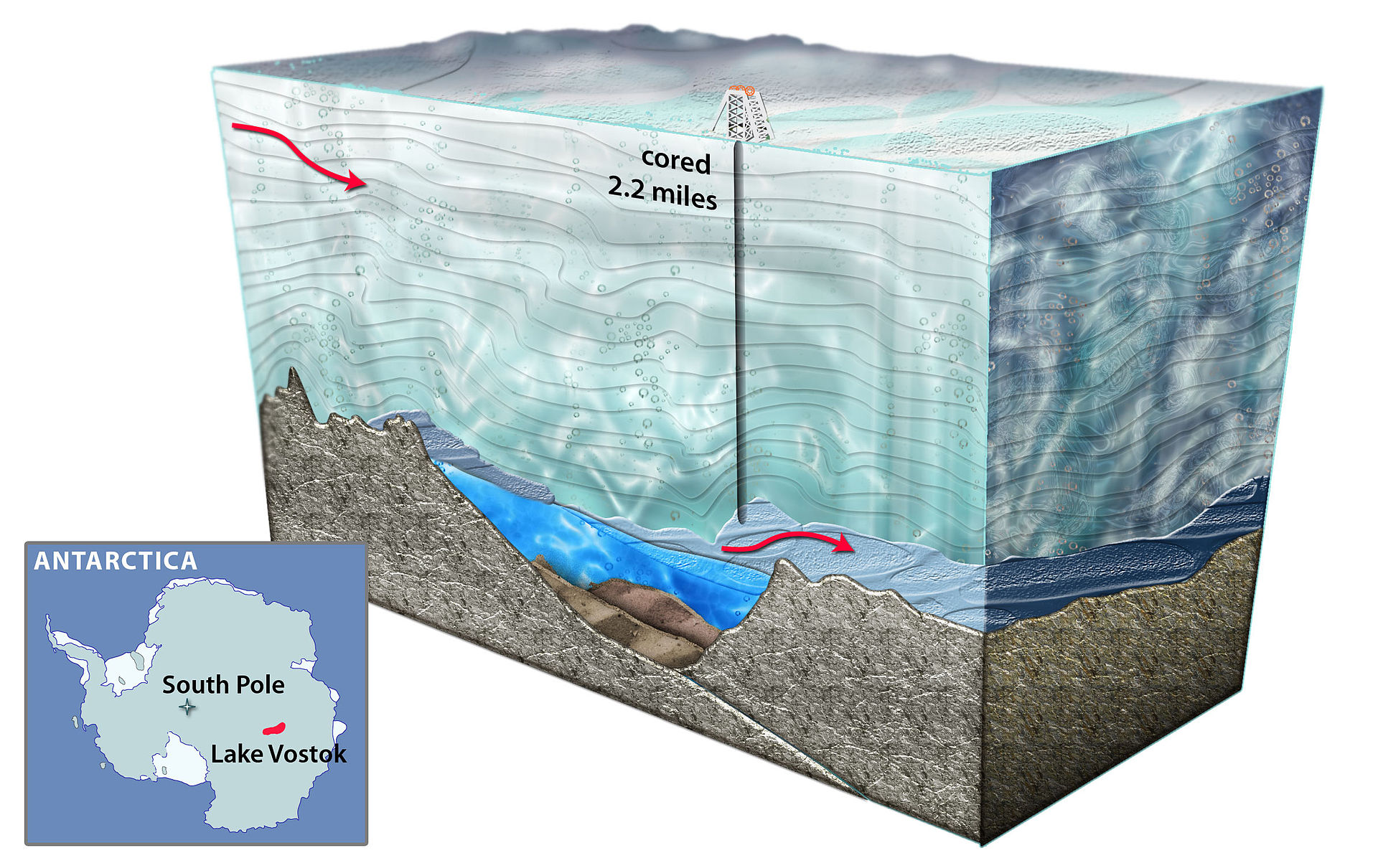 Lake Vostok was first discovered in the late 1950s, though subglacial liquid water had been theorized about since the late 1800s. Lake Vostok and the other subglacial lakes similar to it exist due to several factors. First of all, the sheer weight of the ice sheet above them (13,100 feet of ice produces water pressure of 5,150 PSI, about one third of the pressure in the Marianas Trench) actually lowers the freezing point- the water of the lake is 27 degrees Fahrenheit, which is significantly below freezing. It also heats the water, to an extent- it should be even colder than it is. Finally, there seems to be large levels of geothermal activity occurring beneath the lake.

The lake is most likely supersaturated with nitrogen and oxygen at levels over fifty times higher than in freshwater lakes on the Earth’s surface. Clathrates, gases encased in an icy cage that resembles packed snow, also exist in the depth of Lake Vostok. Among the other weird behaviors of water under this degree of pressure, it’s been known to flow uphill in the Gamburtsevs and other subglacial mountain ranges.

The geothermal heating likely contributing to the liquid state of Lake Vostok likely takes the form of black smokers, underwater volcanic vents. These not only heat the surrounding water, but also add nutrients to it as well.

Many other traits uncommon to lakes occur in Lake Vostok. The lake exists under conditions of complete darkness, and is completely isolated from the atmosphere and outside ecosystem. A magnetic anomaly around 65 by 47 miles in area exists on the east coast of the lake, most likely caused by a thinning of Earth’s crust.

Some scientists believe that Lake Vostok might produce a Jokulhlaups (enormous glacial flood) in the near geological future, and that it might very well be an important part of Lake Vostok’s lifecycle during intraglacial periods. Any such occurrence would create an ice stream, leading to a downdraw of the ice surface in that area.

The structure of the lake and the ice around it is rather unique. The ice resting above it provides a continuous paleoclimactic record for over 400,000 years- it would be longer, but since the ice is continually slowly flowing downhill, it gets replaced over time. As such, cores acquired from drilling aren’t just obstructions to learning more about Lake Vostok, but also provide valuable scientific data in their own right about ancient climates. At the bottom of the glacial ice, there is a layer of accretion ice- that is, ice frozen off the top of the lake. The accretion ice is thinner upglacier and thicker downglacier, and stretches some distance past the lake, where it has been hauled by the flow of the glacier. Below the accretion ice lies the lake itself. Various clathrates rest atop the bottom, and below that lies accumulated sediment.

Many scientists believe that there are subglacial “rivers” connecting the various lakes. Unlike actual rivers on the surface, though, currents in these might be propelled from areas of higher to lower pressure, rather than being propelled by gravity, as most rivers are. (So some might run up hill, like the alpine “streams” in the Gamburtsevs. These “rivers” are most likely temporary, rather than permanent, features. Much debate has occurred regarding the possible presence of life in the lake- if it does exist, millions of years of isolation would have driven it in unusual directions. It is highly unlikely that anything other than microbial life lives in the lake. The actual process of searching for life in the lake is quite difficult- it involves drilling miles deep cores down to the lake itself, while making sure that it’s not contaminated. Keeping the boreholes unfrozen involves upwards of 60 tons of liquids that won’t freeze at those temperatures- kerosene, for instance.

Evidence of life in the lake began showing up as early as the 1990s in accretion ice above the lake. More recent Russian attempts to drill into the lake have resulted in the discovery of life within the water. There is some debate about it, since there were possible contamination issues from the drilling techniques used with several early attempts, but much of the evidence is currently pointing towards a unique ecosystem being present underneath the ice.

Around 3,500 unique gene sequences were discovered in some of the samples, a little under half of which were from a known species or genus. A small percentage of them were from multicellular eukaryotic life. Around 255 species have been identified as contaminant species from the drilling process.

While not completely impossible that life larger than microbial life might exist, speculation about such is rather far-fetched at the moment- we know too little to say comfortably that it might exist. If it did, it would likely take similar forms to life around the deep sea vents in the deep ocean, which also lack sunlight and other nutrient sources, and live under extremely high pressure. These types of vents do appear to exist in Lake Vostok. In addition, many of the species thought to have been found in Lake Vostok frequently appear alongside larger lifeforms- uncertainty about whether or not they are contaminants, however, has dampened speculation considerably. In addition, life has been found in the seawater far below the Ross Ice shelf in the grounding zone, which shares some, though by no means all, of the traits of the subglacial lakes- it does share the high pressure, low temperatures, and complete lack of sunlight that Vostok has, though it isn’t as isolated, and lacks many of the odder quirks (like the oxygen and nitrogen supersaturation.

In addition, the conditions of Lake Vostok and many of its sister lakes might be very similar to the conditions of Europa, one of the larger moons of Jupiter, and Enceladus, one of the moons of Saturn, each of which might have large oceans underneath their thick surface layers of ice- possibly life, as well. Exploration of Lake Vostok can help us develop techniques for drilling into the ice cover of those moons, as well as helping us understand what conditions underneath them might look like. (Though it does appear that Enceladus, at least, likely has saltwater oceans instead of being freshwater, like Lake Vostok.)

Along with the benefits to the biological, geological, and planetary sciences, there are also some more prosaic benefits. The ice cores retrieved in the process of drilling down towards Lake Vostok have been some of the most productive in terms of examining paleoclimates. They’re extremely important in regards to learning how our climate has behaved in the past, as well as predicting how our climate will change in the near future. 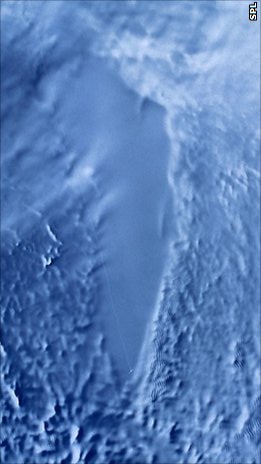