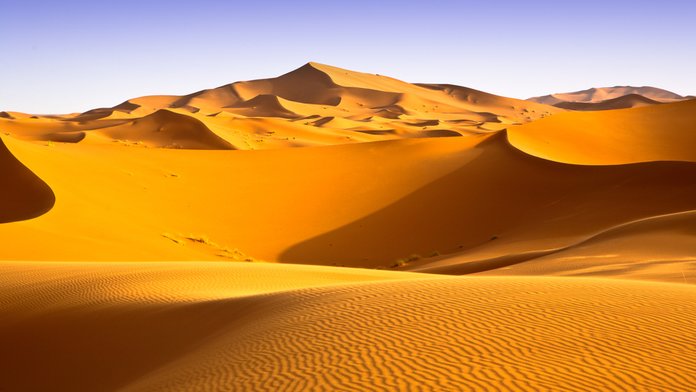 People have talked about transforming deserts into friendlier ecosystems for a long time. The Sahara is by far the most popular desert used as an example. Pump enough desalinated water from the ocean, you’ve got a new garden-like environment. It’s a cool idea in theory, but in practice it’s an extraordinarily bad idea.

First off, deserts are important parts of the global climate system. Eliminating the desert in the way discussed would produce a brand new moisture upwelling zone in the middle of Africa, likely resulting in the formation of new deserts elsewhere, as well as truly catastrophic weather patterns as the planet adjusted.

That’s not the only problem, either- it would be catastrophic to the Amazon rainforest, which is heavily dependent upon nutrients in the form of dust carried to it on the wind from the Sahara. That massive expanse of unconsolidated sediment that is the Sahara is essential for the survival of the imperiled rain forest, which is the single most important land biome for global weather stability and biodiversity.

That’s still not the last problem- there are countless species that only live in the Sahara, and transforming it into a garden would drive many of these delicate drought adapted species extinct.

Hell, on top of that, there are people living in the Sahara by choice, just like their ancestors for countless generations before them. I can’t imagine that many of them would be extremely fond of the plan.

I can keep listing reasons for a while, but it boils down to a fundamental principle: Forcing the Earth to conform to our desires rather than adapting to the conditions of the Earth is a profoundly risky task that results in unforeseen and often catastrophic environmental, ecological, economical, and social consequences.

Let’s take a look at some past attempts at geoengineering that have actually got off the ground.

First off, we have the great tree farms of 1800s Germany. They were adored by intellectuals at the time as masterful works of scientific agriculture and planning. They featured neat rows sorted by tree type, no undergrowth getting in the way, and clearly surveyed boundaries. They were orderly and easy to tend and harvest. And, indeed, their output was much higher than that of actual forests- at first. Within a few short years, however, productivity began dropping and dropping and dropping, until many of the tree farms were running at a loss. The planners had completely failed to understand that the health of the forest was massively dependent on the complex ecosystem it sustained and lived in- and without it, their project was doomed to failure. There were also harmful social consequences of the projects. The forests that the farms had replaced had been used by local villagers to support themselves since medieval times and before. Pigs were herded in the forests to eat acorns and mushrooms. Coppicing and the gathering of downed branches provided firewood for the forests. Small game provided much needed protein in the villagers’ diets. Without the forests, the economic situation of the villagers rapidly worsened, resulting in mass migrations to cities and even the Americas, as well as rampant poverty and vagrancy.

Next let’s take a look at the Aral Sea. Or, rather, we won’t, because it doesn’t exist anymore. It’s gone. Kaput. Why? Well, almost entirely due to the rivers feeding it being diverted for a series of wasteful large-scale agricultural projects by the Soviet Union now being maintained by Kazakhstan and Uzbekistan. This was an attempt to geoengineer the area to make it a viable cotton producing region. And, again, it worked for a while- but it’s not so successful today. The vanishing of the Aral Sea has also resulted in the loss of jobs and traditional livelihoods for all of those who lived on the shore. As if that weren’t bad enough, the years of industry and agriculture before the draining of the sea filled the seafloor sediments with fertilizer, pesticides, industrial contaminants, nuclear waste, and more nasty stuff. Now the exposed toxic dust is being blown hundreds of miles, causing an epidemic of cancer, poisoning, birth deformities, and other chronic health problems. The Mississippi River has been drying to escape into the Atchafalaya River for around a century now. The dedicated efforts of the Army Corps of Engineers are the only thing standing in its way, because if the Mississippi diverts, New Orleans will wither and die- along with one of the single most productive industrial zones on the planet lining the banks of the Mississippi below the Atchafalaya. But, because of their efforts, as well as the dredging necessary to keep the channel clean, the huge marshlands that bordered the Louisiana delta and protected it from storm surges are rapidly eroding away, leaving the state severely vulnerable to hurricanes. On top of that, without the constant sediment flow to keep rebuilding the delta, the whole thing is sinking into the Gulf of Mexico.

There are a lot of geoengineering plans to save us from global warming. One involves dumping powdered iron in the Antarctic Ocean to make it more of a carbon sink. It would actually solve the problem- but it also very well might sterilize the oceans. Another involves injecting light deflecting particles into the atmosphere to reduce incoming solar radiation. This could not only have disastrous effects on global weather patterns, including causing a deadly drought in the Sahel savanna in Africa and potentially suppressing the absolutely vital summer monsoons in the Indian Ocean, without which India would be uninhabitable. (Millions typically die in any year when the monsoons fail.) It would potentially do immense harm to numerous plant and animal species that are extremely dependent on sunlight. And to add insult to injury, it would make ground based astronomy nearly impossible.

I can keep going on for literally hours. LA’s constructions in landslide zones. The attempts to practice European style agriculture on the American Great Plains that led to the Dust Bowl. The degrading Nile River Delta due to the Aswan Dam. Immense geoengineering projects are dangerous and unpredictable. It is by far better to live by adapting TO nature, by treading as lightly as we can, and by doing our damned best to understand the ecosystems we live in.

If you’re particularly interested in the dangers and difficulties of geoengineering, I highly recommend starting learning about them by reading both John McPhee’s The Control of Nature and James C. Scott’s Seeing Like A State. The latter, thicker work also covers a number of utopian social projects, as well as discussing the philosophies that are so often behind them and geoengineering.

This essay was originally posted on my steemit blog at https://steemit.com/@mountainwashere in slightly different form.