While doing research for another project of mine the other night, I found myself clicking the link to look up a random Wikipedia article. (Bet you that you’ll likely get an athlete if you click that link.) Out of a combined sense of boredom and curiosity, I decided to chronicle what would happen if I did it 100 times. My initial hypothesis was that the articles I would see the most of would be athletes and towns- assumptions that bore out pretty well, to be honest, with the exception of the very broad Entertainment category.

Some notes about how I handled difficult to categorize articles- Disambiguation pages presented the most obvious challenge, but I simplified that one fairly easily- I just counted the topmost linked article on the disambiguation page instead (with the exception of a disambiguation page for a surname, which I just placed under surname). In addition, the religion category proved rather difficult for me, since no two articles I got under there fit in the same subcategory- I got religious figures, specific churches, religious divisions… I grew frustrated there, and just jammed them all into Religious Topics. Most other categories worked out a bit better. Overall, there is a certain degree of inconsistency in the level of specificity of category, which is largely attributable to me doing this late at night. I made you a shitty pie chart, too! Anyhow, here we go, in descending order of quantity: 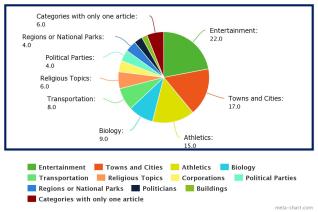 As for the article I found most interesting? Well, that would be the article on Salyut 6. What can I say? I really like space travel, and I’d never even heard of the Salyut program before somehow, which makes me feel pretty dumb.